I was told to use the oxygen when I was active.  Not when sitting down.  This is the oxygen set at 2 from the bottle in the chariot. I have to sniff it in. I have had a few scary episodes when try as I might nothing happens when I sniff in.  The DP has to come and change the tubes.  We both worry as to what might happen if this occurs when he is out.

At night the oxygen making machine feeds me a constant level 1 via the green snake.  A total of 15 hours  is prescribed.  I check my oxygen levels with a pulsometer.  The level should be in the high 90s.  It never gets to that.  I am lucky to wake up with it at 90.  After that it fluctuates from 47 upwards.  So I am using the oxygen when eating and or chatting even though sat down.  This after being nagged at by the DP.

This afternoon I had seen the weather forecast promised better weather than yesterday.  So I was out of the car.  Oxygen attached and off.  Still the wind though not as strong.  Cold.  Nasty. Indeed 'Orrid. 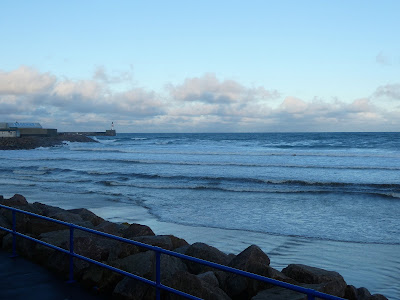 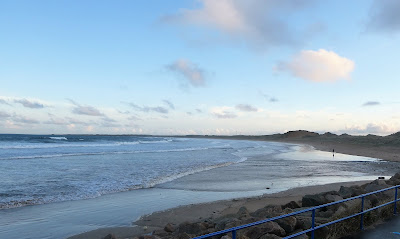 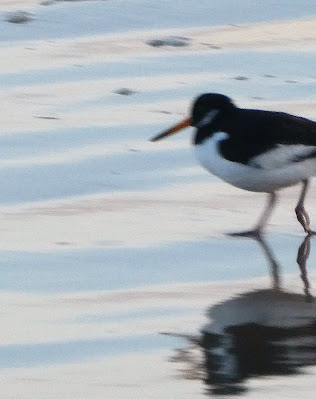 The sea was not rough like yesterday but still plenty surf.

I managed to walk to the Kessock Burn then turned to return.  The wind was now in my face.  I panicced.  I could not breathe.  But of course I did.  Managed to get to a shelter and out of the wind.  But it really should not be like this.

So I will be contacting the Oxygen team on Monday.

Well on a lighter note the tree is up and lit.  Decorations brought in from the garage.  Hoping there is not a mouse in the bag as there was last year.

And we have new neighbours.  Sheep in the field across the lane.

Hope things go well for you over the weekend. I mentioned in my last post that we've got health problems to cope with here (perhaps less serious but still serious). Isn't it annoying the way these things happen at the weekend? It's always Friday or Saturday night for some reason when we find ourselves thinking, hmm, perhaps we should on to the doctor/nurse/etc. Then we have to wait till Monday!

I’m sorry you’re struggling so hard to breath,, such a struggle. I like the sound of those new neighbours!

I've worked with a lot of COPD patients and their O2 sats are kept between 89 and 92% when on their portable tanks.

How nice to have new neighbours, even of the animal kind. Something new to observe. Will there be lambs soon?

Hope all goes well this weekend. Also hope no christmice slip in

Like everyone else I do hope things go well for the rest of the weekend and the oxygen team figures out something to help you.

I wonder if you could put it up to 3, Tom has been told that he can increase the oxygen to 3 if he feels that he needs it but I know that COPD may not be the same as IPF.
My heart goes out to you as I know what you are going through. I hate it when Tom gets into trouble with his breathing it scares the pants off of both of us.
Briony
x

Hope things get better with the oxygen problem. Keep painting those wonderful oyster catchers. I never knew oysters could move!

How awful for you.Hope you get some help tomorrow.

Gosh, that looks cold on the beach.

Sorry about the oxygen problems - as someone said, it's always weekends isn't it, if we are to have a problem needing advice/help.

The Weaver of Grass said...

Sheep just add to the Christmassy feeling I think.

Your new neighbours sound perfect. I hope you get a swift response from the oxygen team. X

Well done for getting out for a walk. It must be terrifying to be short of breath. I remember my dad who had what was called emphysema then but copd now I believe. He lived until 91 though.

Hope the oxygen team can get your problem sorted. It is important for you to be able to stay active - you enjoy it so.

Get your sats monitor checked. Problem with non professionals using it read it wrong. Under 70 you would be confused brain damage which you have not got and 47 would definitely be under the grass . Would be under the grass around 67.ALLIE