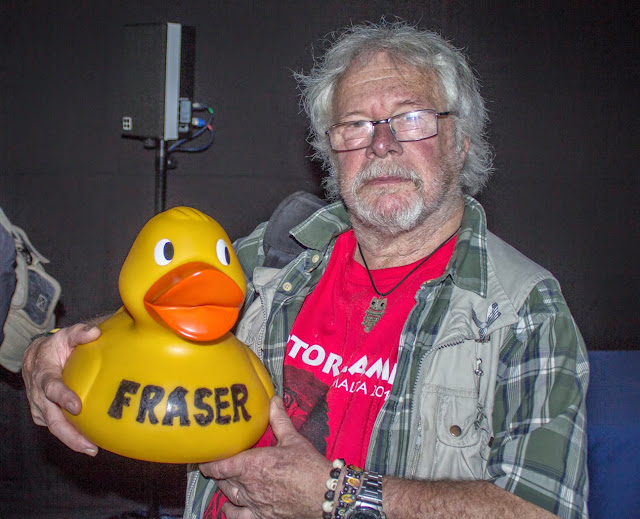 Yes.  One more post then thats it.  Damn things are taking over my life. 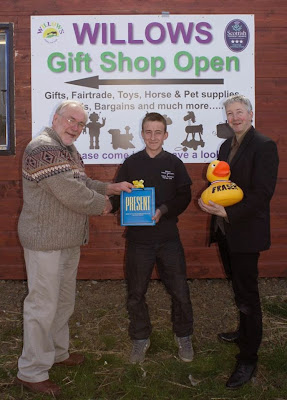 The sale of the little yellow ducks raised over £200.  We sold 100 on one day at Super Saturday (which is a monthly event in the Summer to regenerate the toon centre.)
Here is the DP on the left handing over the dosh.  Ian on the right is the lovely chap who owns a proper old fashioned newsagent/toy shop in Fraserburgh and sold most of the ducks.  And is constantly being pestered for more.  So hey ho we have another 100 winging their way up from Englandshire.

Fraser, who Ian is holding, is Fraserburgh's ambassaduck.  The DP is the chair of Fraserburgh Area Tourism Group.  I tell you friends this duck thing has really took off. 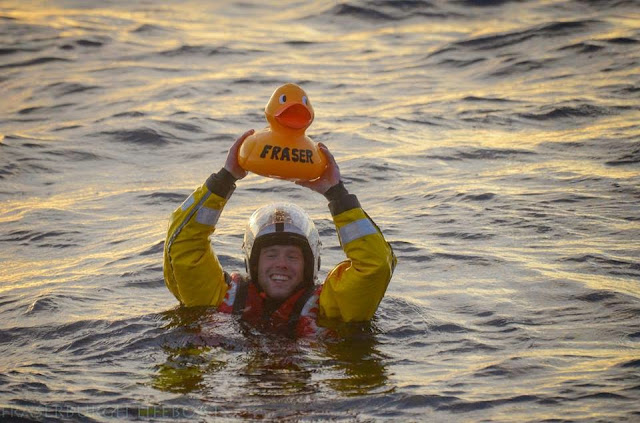 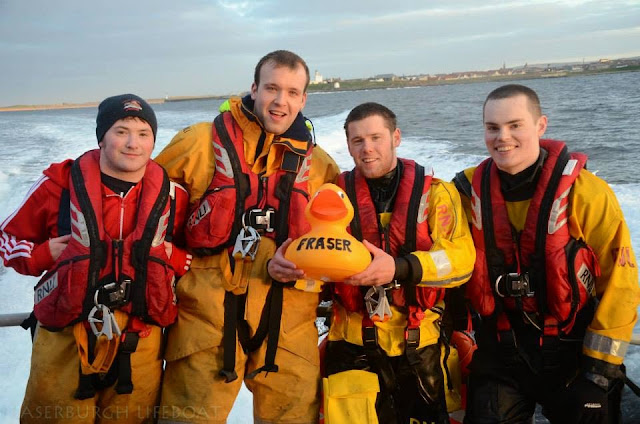 (I have decided to become a volunteer. I do have a bronze medal in life saving. )  Fit!

The facebook page continues to have people posting up their placing or discovering other peoples placings of the yellow ducks. 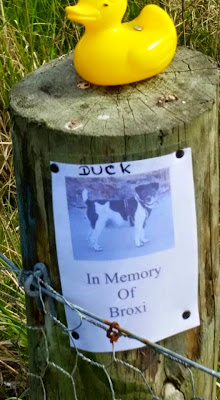 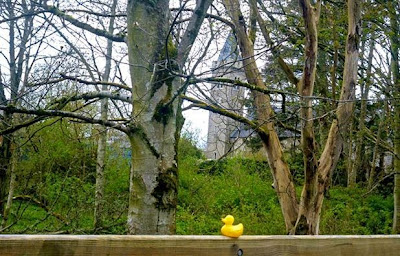 But - for me -  the best ones are where the wee ones find the yalla dooks. 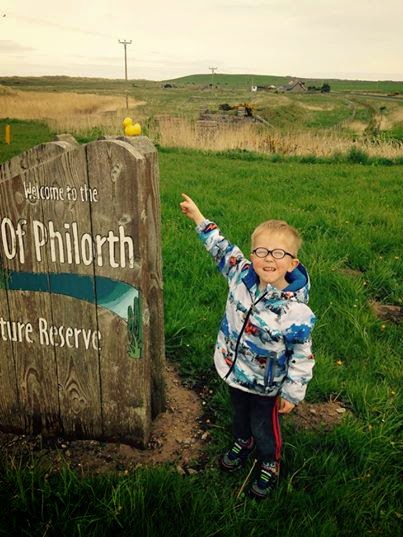 The latest is the independent shopkeepers in Fraserburgh now want to dress their shop windows with a yellow duck.  Size in between Fraser and the wee ones.

Hence my duck dreams.
Posted by justjill at 18:18 3 comments:

Travelup will rip you off.

The Dawn Patroller likes his jaunts.  Always linked to taking photographs of course.  Plan is he is off to Sumatra, Indonesia in July. 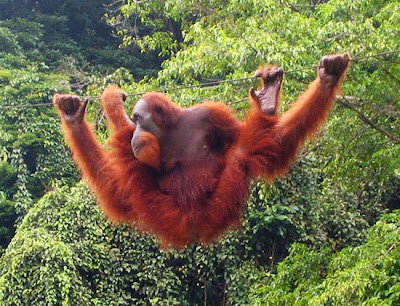 No, that is not the Dawn Patroller, but does have some similarities.....

As most of the time he is chief bottle washer, cleaner, gardener, log chopper, chef, purchaser of wine..... I have no problems with being left.  So long as he stocks the wine rack up before he departs,

He is not going alone.  His sister who is an even more intrepid jaunter and photographer is also going. 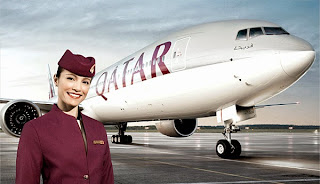 On one of these aeroplanes.  I hasten to add I have no complaint with the airline at all.  Indeed they have been most helpful.  No its the agent. TRAVELUP.

When the DP booked the flights he had a senior moment, dont we all, and made a spelling error in his sisters name.  He realised almost straight away and told TRAVELUP.

Now this is the bit I find hard to believe, as does Qatar, TRAVELUP  cannot alter the ticket.

They give a time limit for name alterations which the DP was well within but carried on and issued the ticket in the wrong name.

Which, they then said, they cannot alter.  The argument has been going on since March.

So - to ensure the two travel together, or even travel at all, as no way the DP's sister would be allowed on any plane with a name which did not match her passport,  we paid for another ticket and cancelled the original.  So they can cancel the ticket and give you another one.  But then  the refund is only the airport taxes which apparently are only in double figures not the 3 of the original ticket.  Hmmm.

Needless to say court action is being prepared.

Nasty taste left in mouth.  Yes we did contact the bank, we have a ticket, end of story. Ticket that cannot be used but hey ho.

Just thought I would warn anyone considering using TRAVELUP.

Email ThisBlogThis!Share to TwitterShare to FacebookShare to Pinterest
Labels: Travelup.

Now these wee beasties are going to be placed at each of the Visitor Attractions in and aroond Fraserburgh.

Then to raise yet more money for The Willows and to raise the profile for tourists and locals alike a quiz sheet will be sold.  Answers to the quiz can only be found by visiting the Visitor Attraction and correctly identifying the duck .  For instance.  Green Duck -= Lighthouse Museum. (Though that is not the answer! No cheating.)

Now this is where we go totally Quackers. 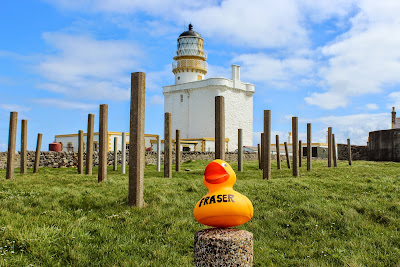 This is Fraser.  A very large plastic duck. 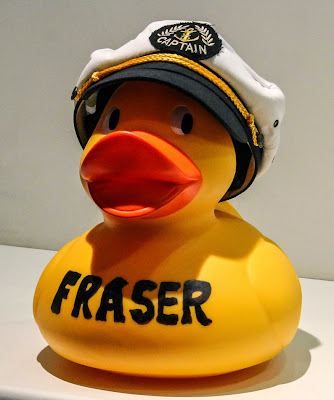 Fraser is our Ambassaduck.  He will journey all over to promote the tourism industry of Fraserburgh and area.

He is away to Glasgow this weekend.  He is booked for Dundee.  A trip/rescue by  the Fraserburgh Life boat, I hope they don't lose him......A trip to Norway.  Once in parts abroad contact will be made by his carer with the local tourism office there and we will share our information.  Fraser will indeed be an Ambassaduck!

And finally I have to show you the picture of the originator of Fraserburgh Yellow Ducks.  He bought the first ducks and placed them on fences to raise a smile , nothing more, nothing less.

We managed to persuade him to reveal himself.  What a lovely chap. 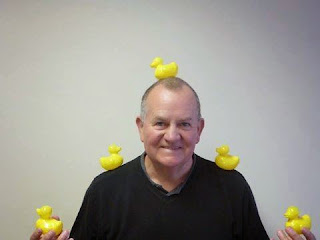 The ducks continue to proliferate.

The Dawn Patroller and I purchased a 100 wee yellow ducks.

Together with a local shopkeeper, Ian Dyga, they were displayed and on sale for £1 each. (He had more customers coming through his doors!) 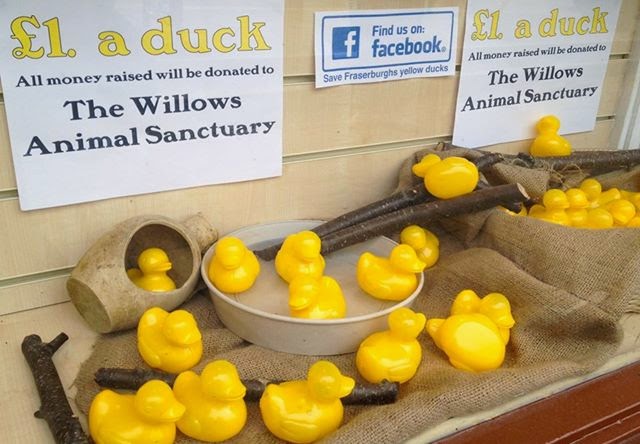 Sold out in a week.

People bought their duck and then placed it and took a photograph. 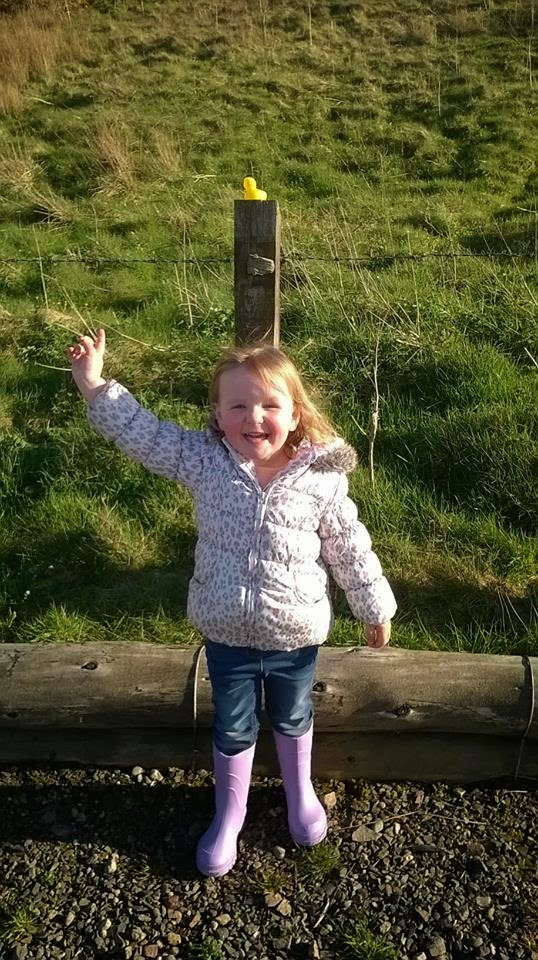 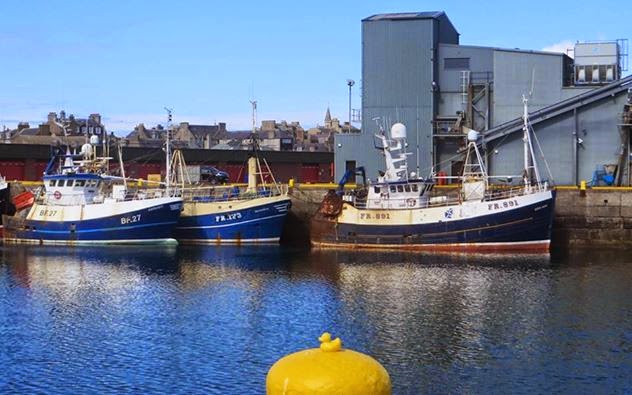 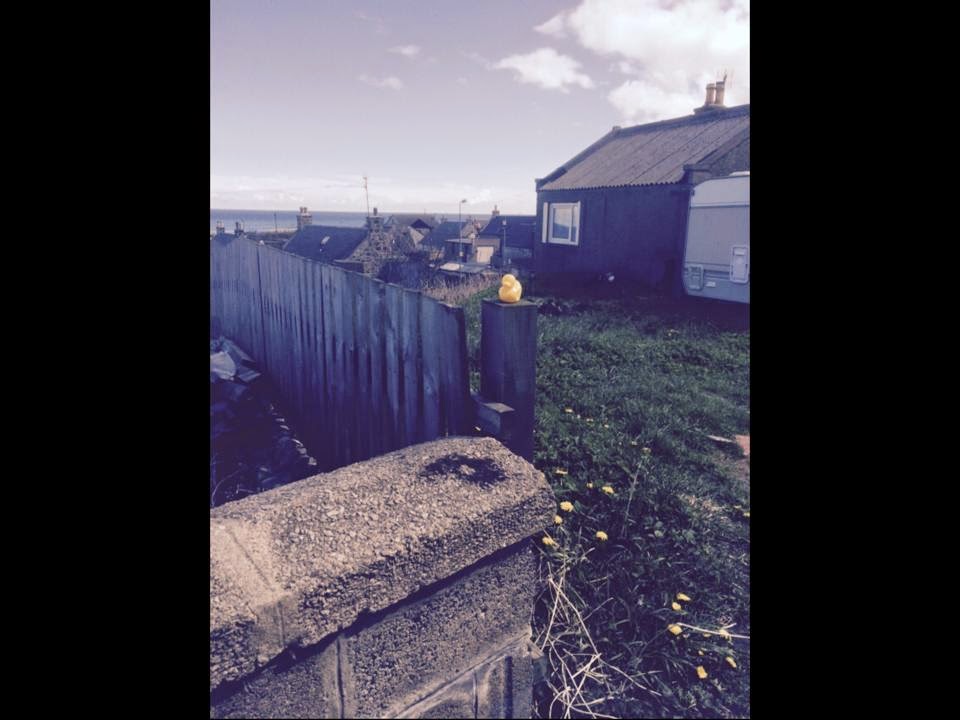 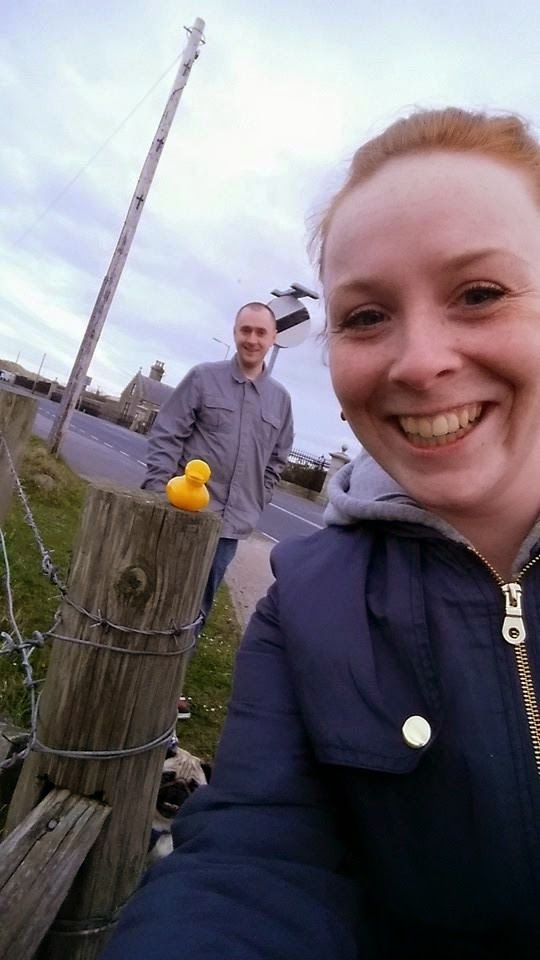 Then posted it on to facebook  As you can see from these few pics how much everyone is enjoying the ducks.  Lots and lots more on the fb page.

Planning our next move. 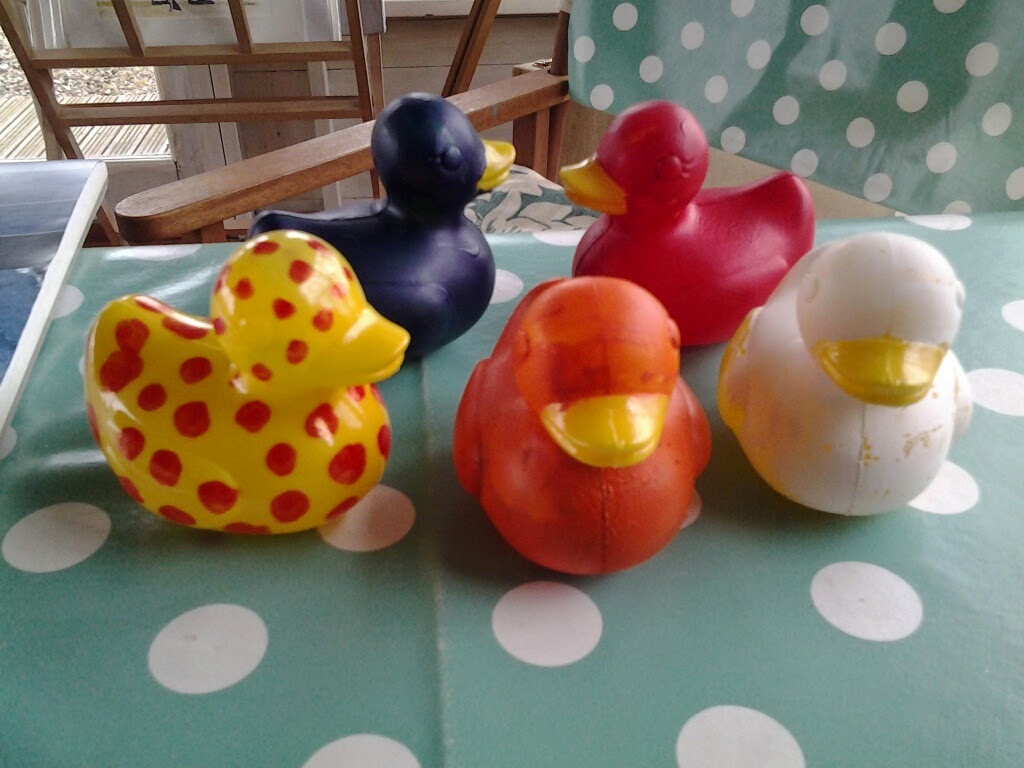 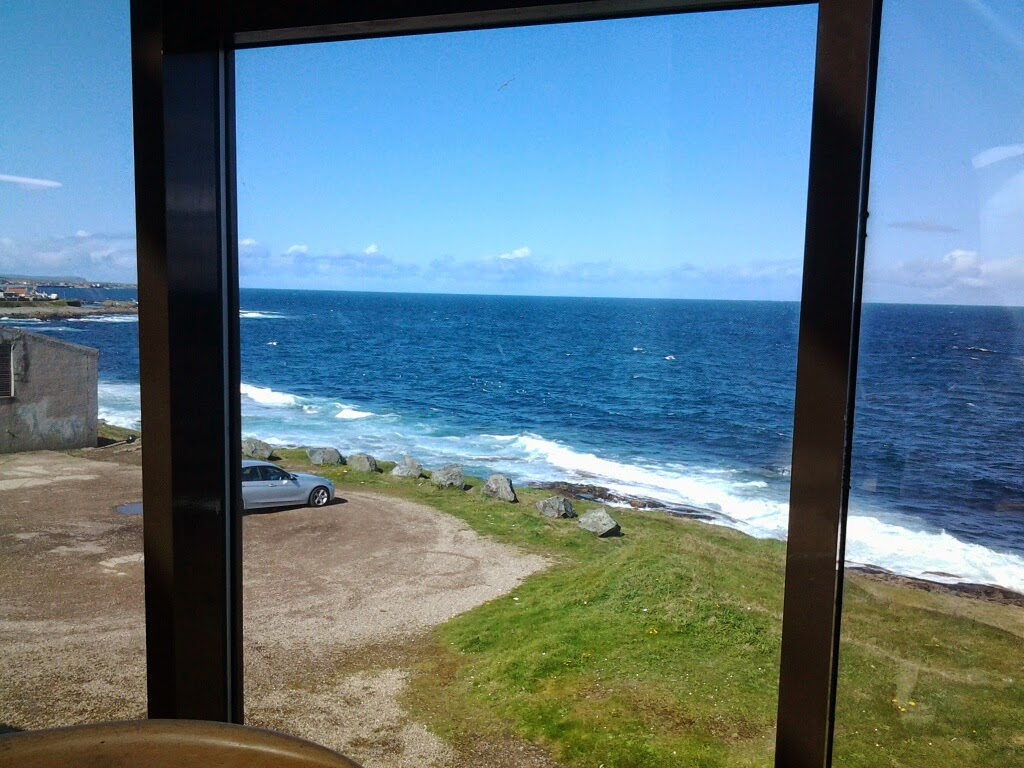 When I was a trustee and a volunteer at the Museum of Scottish Lighthouses coffee and lunch was often a moveable feast.  I happily moved my seat in the cafe so that the tourists and visitors got the best view.

Only when entertaining visitors and friends did I feel I could utilise the best seat in the house/cafe.

Sometimes there were friends who also blog, Christine Laennec  -Writing from Scotland - and The Quiet Home's Tina.

My other bloggy friend Marina who writes as the Desert Diva and has the occasional trip back here from the UAE joined me just last week.  (So I may be painting a camel with a tenuous link to Buchan!)

Now I am no longer a trustee and my volunteering skills "No longer required."

I sit where I want.