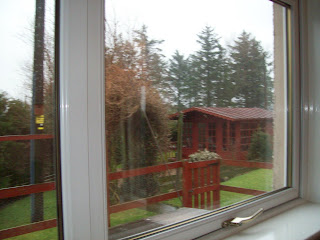 Through the kitchen window one can see the summerhouse. Can't wait, glass of wine, lap top, sketch book, sewing machine. Shall be spoilt for choice of what to do. And all the time to do it in.
No guests to meet and greet, no ironing, no cleaning, no washing, for any one else but us . Got you worried there for a minute I'll bet! No, we are not going to wallow in filth.... 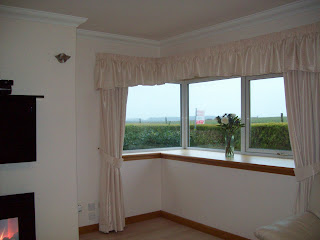 There is this sitting room to transform for a start. I do not do frills, or tie backs, or pelmets.
Through this window you can see one of the matters that will take Mike's attention, hedges all round, and all trimmed to a nicety - theres no way we can keep up to that perfection.
Before we move I have the nightmare of working out which of our furniture we will be taking, what I have to get rid of, some of it with, I have to admit, a tear. Either it wont fit size wise or it wont fit in with my plans.
We have a large quantity of pictures. In our current house that still leaves a lot of wall space. But in the 'new house', well, unless I want it to look like an art gallery, or cluttered curio shop I am really going to have to do some pruning.
The Madonna who looks down on the kitchen sink here.
The Renoir, 'Girl on her first visit to the theatre.'
The Dufy, 'The Band'.
There must be 30 plus pictures of birds.
Limited edition prints of the Yorkshire countryside.
Map of Staffordshire.
Maps of Banff and Buchan.
And more.
Decisions, decisions.
So this Chandler isn't resting just yet.
Posted by justjill at 20:09 1 comment:

This is the house we have chosen to move to. A nail biting time now while the solicitors earn their money writing to each other.
We first viewed the house in June 2010. I fell in love with it. On our second viewing it still ticked all my boxes.
But I still cannot get excited - not until the solicitors give me their permission!
Also, we are still working here running our bed and breakfast. So I cannot begin to sort and pack. Not good for guests to see patches on the wall where a picture once was.
Or empty shelves in our library. And have to climb over and around boxes.
At some stage we are going to have to empty the loft.......
So I am stuck twiddling my thumbs, champing at the bit, choose your own metaphor.
I feel like a catapult that has been pulled back ready to launch its missile and stayed pulled back.
I console myself with dreams of sitting in the (smaller) garden, sheltered by hedges (albeit mainly the dreaded leylandii) sipping a glass of wine. Not having to be alert and waiting to welcome paying guests.
This will have followed a day of totally transforming the tinier house!
My husband always says I have the patience of a gnat.
Posted by justjill at 15:21 No comments: 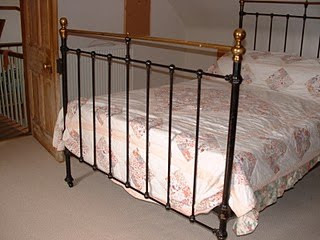 Now trying to get my head round what we have to discard along the way.
I found this bed in a second hand shop almost forty years ago! It holds many memories. But it has to go.
The house we currently occupy has seven bedrooms. Six of which have beds in. The most we will require when we downsize is three.
Five bedrooms are 'fully furnished' with wardrobes, drawers, bedside tables, etc.
If our eventual purchasers wish to carry on the bed and breakfast we run then they may want to take on some of that furniture. Who our eventual purchasers are remains in the melting pot. But if they don't I have to organise getting rid of it all.
Equally the dining room furniture. Where there are two large tables, eight dining chairs, and a sideboard.
We have enough crockery to feed an army. Over and above what we use ourselves, I might add.
Then there is the snug. Our wee open fired sitting room. Two 'bucket' chairs, which I love, bought second hand and recovered by moi, I was so proud of myself. A huge coffee table, which I also love, ex Ikea, the one with spaces for storage baskets. And a standard lamp.
Occasional tables are dotted about as we have a large and long corridor and hallway. Together with an ancient treadle Singer sewing machine.
My bedroom is more a bedsit! I have a work station, where I sit now writing this. Two arm chairs, one of which is yet another example of my fledgling skills at reupholstering, so again, much affection! A large wooden chest, a tea trolley, which is my entertainment centre - t.v. d.v.d. player, piles of magazines, and a garden table and chairs overwintering.
Outside, in the garden are more tables and chairs, four sets at the last count, and a bench.
Aaaargh.
It would help, enormously, if I knew where we were downsizing to. At the moment our short list consists of one. The rest have been sold or disappeared. So along with all my other worries I am in the throes of more panic - what if all we can buy is a caravan!
Posted by justjill at 14:56 1 comment: 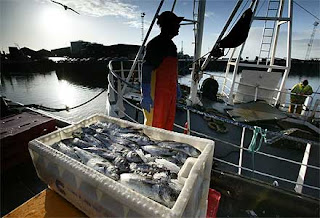 The fish are on their way to the fish market.
Peterhead is the largest white fish port in Europe.
It is called the Bloo Toon. Blue being the colour of the fishermens' jerseys.
Years past they caught whales.
Nowadays there are also a lot of langoustines landed.
I drive alongside the harbour when I visit the supermarket. Looking at some of the ships I think fishermen have to be very brave to sail the seas. Some of the boats are rusty, and look inadequate for the task. Alongside are mini liners with all the latest technology. But they all go out and do the same job.
Also at the harbour are huge buildings for processing the catch. Unfortunately these are between the houses and guest houses and bed and breakfasts, many of them called, Sea View, Harbour View, Bay View. Sounds better than Factory View, but that is what they have today.
The Planners in this area have a lot to answer for.
In our quest to down size I often wonder if we should be looking at houses nearer the sea.
We are ten minutes away from sight of the sea.
There are some beautiful small fishing villages around. But they all seem to have very small gardens, if a garden at all. The descriptions are "Easily maintained, enclosed garden. Shed."
Currently with half an acre, which, yes, is now too big for us, I would still like to have some space with green in it.
And would you not get bored with looking at the sea?
Here we have strong awareness of the seasons. Ploughing now. Soon planting. The different crops. The harvest. There is also the variety of wildlife.
Not many pheasants or deer on the beach!
So for now the search continues inland.
Posted by justjill at 16:47 1 comment: