Some people I like and some I do not.

Still cold.  But the sun was with us.

The DP wrote to the council telling them about the hedge removal.

I refer to your email to my partner Jill dated 20th December 2018.

I have discussed the contents with our neighbour at Lyndorran and he agrees that the changes and improvements you have outlined for his side of the junction should improve matters.

I also discussed with him the boundary between Cherry Cottage and the highway.  He renovated and lived in Cherry Cottage.  He told me that within the hedge there is his original fence that represents the boundary line.  Taking this on board and you comments about the sight line at the junction I have removed the hedge. (Photo attached).  Your suggestion that the hedge be trimmed was not practical.  Leylandii hedge will not grow back if it is trimmed to the extent that is required.  That has cost me £300.   I am now in the process of getting a quote for the removal of all the fencing and replacing it on the boundary line.  I then intend to replant a hedge on my side of the new fence.
In all it will cost us around £1000 (this is on top of the £1000+ we have already spent repairing damage to the old fence and hedge) As pensioners it is not a sum I want to spend and then worry that further expense will be needed as vehicles come off your highway and damage the fence and hedge as they have done all too frequently in the recent past.
I would therefore like you to amend your proposals for the junction by including a kerb and black and white verge marker posts around the radius on the side of Cherry Cottage.  The person who removed the hedge for me returned yesterday to chip the remains of the hedge and he reported to me that he had seen several vehicles cutting the corner and driving over the verge and close to the boundary line.  To be honest I suspect that now the hedge has been removed and the sight line improved it has led to cars going that bit faster round the corner.
On another highway matter can I ask that something is done to improve the road drainage between Cherry cottage and North Lodge.  In heavy rain and snow melt conditions all the water drains onto the Cherry Cottage drive. Our drain is unable to cope with the volume of water that then floods the garage and creates a small burn flowing past our front door.  To stop this I have go out in the deluge and sometimes in the dark and dig out ditches to drain the road before it gets to Cherry Cottage.  My ditches are then destroyed as soon as a heavy vehicle drives over it.  Can you please install at least two kerbed drains that will not be damaged in order to prevent water from the highway flooding my property.

This was the reply,

Firstly may I thank you for taking the time to carry out the visibility improvements at the junction, it's just a shame that the whole hedge had to be removed.

With regards to your requests, I can advise that :

Can I suggest that, once you have erected your new fenceline, you plant your new hedging in such a manner that, when fully grown, it doesn't grow through the fenceline.

Now, the DP is the most laid back person I know, but he was fizzing on receiving this reply.

Our joiner is coming in the next few days to give us a price for fencing.  I think it may well be for more than the DP predicted.

So guess where I went?  Aye the Prom. 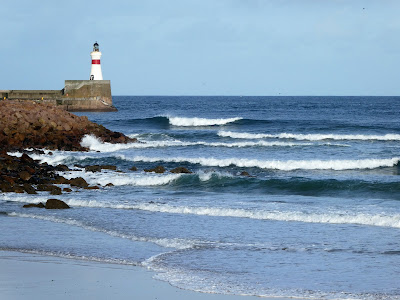 The Golden Horn marking the entrance to the harbour.  Big seas, quite windy, and very cold. 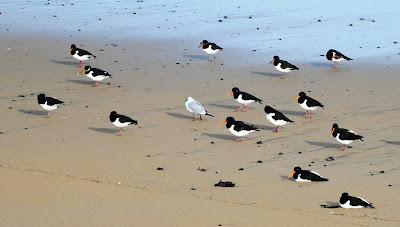 Lots of Oystercatchers.  In the midst of them is a Black Headed Gull.  They are very noisy birds and if you look you can see it is having a shout about something - its beak is open. 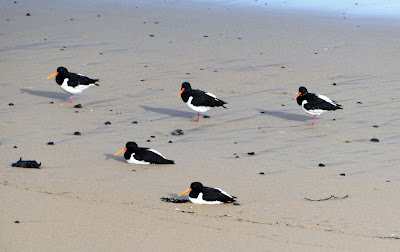 Chose this group of 5.  A possible painting.. 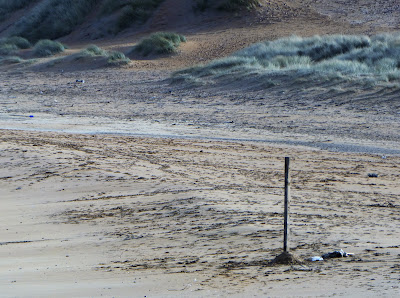 Someone has planted an Obelisk!

Lots of kids today.  Mid term break is what it is called here.  I think (hope) it is only a few days.

I did go to the Shedudio but for a short while as I had my foot lady visit.  After she had done her clipping etc., I was about to return to the shedudio when she came back and announced she had put all her stuff into the car boot and shut it.  Including her car keys and phone.

After calming her down, I think she is still jet lagged after returning from a month long holiday in New Zealand!  I sorted her - the DP took her into Fraserburgh to her in laws who had a spare house key, then he took her to her house to get the spare car key then brought her back here.  Sorted.  I told you he was laid back, he is also a star.

The DP is i deed a star! We live just tound a bend on a road that is used as a rat run to avoid traffic lights on the main road. We all have walls and the first and second houses have both lost their walls with people speeding and coming straight through them. I agree with you Jill about the cost of the fencing-we have torn out the hedges round the other three sides of our garden over the years and were around £1000 in wood alone. DH and DD put the fences up and I provided food and drink.

You are very lucky with your DP. Does he do house calls?

I think you should rather be pleased when there are kids at the prom.It makes the place more lively. No?
It must be very depressing to be there alone with the birds, looking at the same old sights of lighthouse, fishing boats,seawaves.But that's a small price to pay for absorbing good sea air.
Luckily, you live in a civilized place; there are places where it's dangerous to be alone anywhere outside.

Personally I can do without the sounds of children at the beach. There is nothing so calming and soothing than listening to the sounds of the waves and watching the beautiful seabirds. One never tires of this as the movement of the sea changes constantly. Good luck with your new fence.

I thoroughly agree with your husband's comment! The only way to stop that happening would be to plant a dead hedge! Tracy X

Laid back and a good sort makes for a great man. I enjoy having the beach or cove to myself to, although I must admit to enjoying the beautiful sound of children's laughter.