Weather totally foul.  Heavy rain onto frozen ground and wind.  No thanks.

So for once, on facebook, I looked at 'On this day'.  To see what I had been up to over the past few years, on this day.  Was reminded that 2 years ago I became and orphan as my Mother died.  She had cast me off some years ago so I wasnt too fussed.  Though I never did find out why.

2014  only 3 years ago when I was much fitter.  I was vice chair of the trustees at the Museum of Scottish Lighthouses.  I also arranged the kids crafts in the school holidays with other volunteers.  Our most successful one was on this day three years ago in 2014.  The theme was Pirates.  Anything that had a connection to the Lighthouse.  We did sea birds, sea creatures, etc. and had crafts relating to whatever the subject at other sessions. 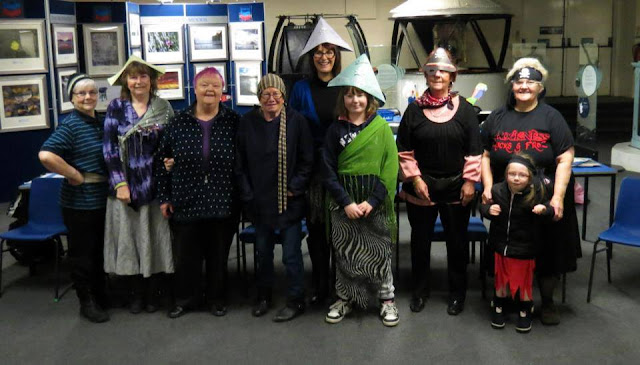 A photograph of the volunteers, I am 4th in from the left.  No chariot in those days.  Only three years ago.  Bit depressing to see how quick I deteriorated....

All the crafts were pirate based.  The kids, and their parents and grandparents loved these sessions.  We had eye patches, hats, etc. to make  - and got dressed up.  We had 72 kids come to this session.  Plus parents etc. We also had a local story teller, The Blacksmiths Daughter. 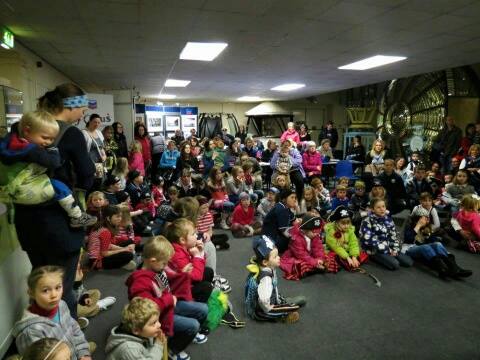 This is the audience for the story teller.

So much fun!  Nowadays there are still craft activities in school holidays but the new manager has put a limit on kids - 25 I think.  Some of the volunteers still volunteer, but say it is not the same.  Well it wouldnt be would it, we were all daft then, now its deadly serious.... And they dont get a roomful of kids, parents, grandparents, the local nursery, aw I will shut up.

Each year we had a wreath making session for adults. 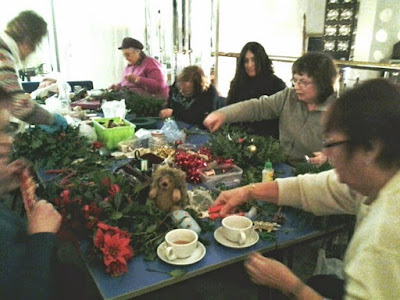 Also I ran a Christmas card competition for all the local primary schools.  The main reason for all these events was to bring the local community in to the Museum.  So many people were saying they had never been in - so we got them in!  Hey ho.  Things change.

The DP went off to the Loch of Strathbeg birdwatching.

The Konik Pony herd.  They eat stuff the bird reserve doesnt want.  And nothing else will eat it. 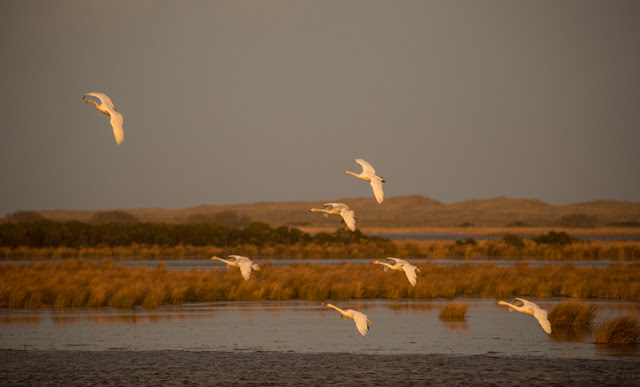 Some of the many Whooper Swans that visit each winter. 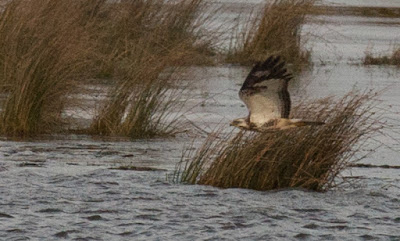 A Common Buzzard, we have our fair share, which live with us all year round.

Meanwhile I did this of a Short Eared Owl which also live with us.  Down the shedudio in between watching small birds.. 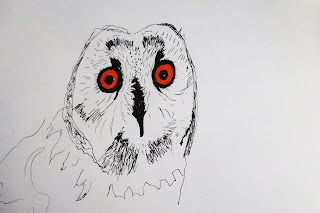 Hoping to get out for a walk tomorrow.
Posted by justjill at 21:29

Hope you have better weather soon and get back out on the promenade. One has to wonder what the Konik ponies eat that no other animal will try! Your owl is coming along nicely.

Things do change, I look at my 'this happened x years ago' on FB too, it does seem a life time ago.

I am having to re-adjust to a number of things - including a sense of my own mortality! It was not so long ago I felt - not necessarily invincible (like you do when you are a youth) but more resilient - I now tread more carefully while I try and get myself on a more even keel. Your pirate themed jolly looks exactly that - jolly! Good to see so many people involved. But - yes, things do change.

Looking back can be a bit confronting, maybe it's best to just enjoy each day as it comes. I love the horses and will have to google to find out more abou them. I hope you can get out soon and the weather is better for you to enjoy the outdoors. Merry Xmas from Downunder. We're in the middle of a heatwave here and it's too hot to stay long outside.