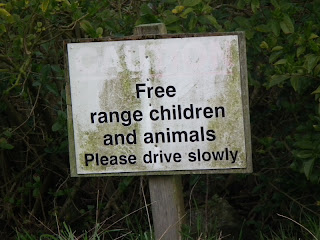 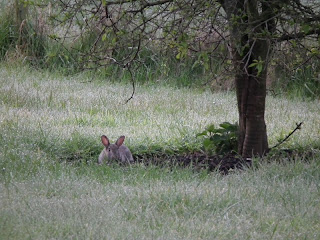 Now these are (free range) Zwartbles sheep.  Native to Friesland in the North of Holland.  These sheep are docile, friendly sheep and being naturally tame, prefer to be led rather than herded.  The wool is sought after by spinners and weavers.  The meat is very lean and sweet.* 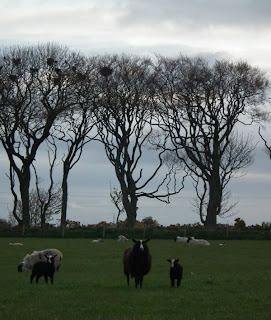 Scotch Mule below, native to Scotland.  Now found throughout the British Isles.  It is a cross between a Blue Faced Leicester ram and a Blackface ewe, bred in large numbers since the early 1900s.
It produces quality meat from natural unadulterated grass and the wool is mainly used for knitwear and tweeds.* 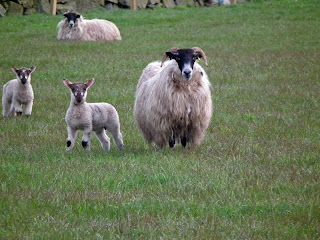 No idea.  Hens at Watty's next door but one.  Watty also has a hand in the masses of pheasants we end up feeding in our garden. 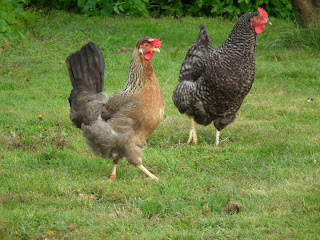 Whilst the DP was off up some Lady's bosom and seeing Capercaillies, I was enjoying my Tuesday.  Free ranging around the Broch (Fraserburgh)

I joined the Knitting Nancies for coffee and then two of us had lunch in the Lighthouse Museum.  Most of the gang are now in the depths of their volunteering their skills in the primary schools.  The two of us who had lunch also rebuilt the bridge between the Knitting Nancies and the new manager of the Lighthouse Museum to the mutual benefit and approval of both.  More later.  And most probably - more free ranging. 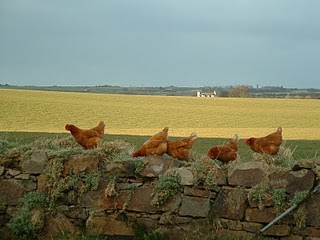 Almost forgot to mention my Wednesday morning art class.  Next two weeks is farm animals/birds.  These were our free ranging hens where we lived over a year ago.  I am doing a painting of this view, with only three hens, and one of them has to be pecking its own feet as, yet again, I do not think ahea.....

I love the colours in your last picture as well as the composition. The hens look as though they're playing Follow my Leader. You definitely had a good 'free range' yourself while DP was in the hills and valleys.
Love from Mum
xx

There are two of those brown sheep in a corner of the field free ranging on the grass. They are HUGE & my friend whose land it is is scared of them ( they head butted her ) I have seen them run along the fence with her daughter.

I was singing Ba Ba black sheep at them & Jess informed me that it has to be " Ba Ba Rainbow sheep " now ! It doesn't fit & seems so stupid. Rainbow sheep ...what has some farmer got carried away with his marking paints ?!

No its this stupid equality/racism/madness.
I remember other stupidities from my time running a playgroup. I risked prosecution every time I opened my mouth.
The rhyme was about a black sheep. So are we not to teach our children the colour black?
Goes off fuming in search of a glass.