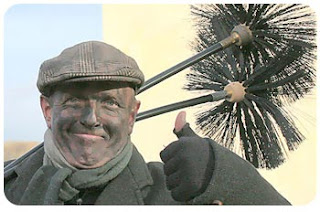 Not by this Fred Dibnah look alike. 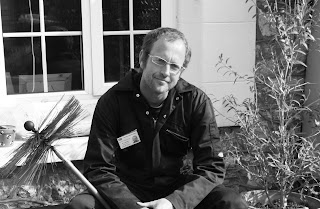 Or this extremely clean person who claims to sweep chimneys.


No it was our Alan, from Yorkshire, (the best), who is actually muckier than Fred Dibnah but better looking, tho possibly not as smirky as sweep number 2.


Alan removed the cap off the chimney, removed the Jackdaws nest and announced our chimney clean and ready for the multifuel stove.  He also had a cup of tea and told us about his bills from the vets to save his calves.
It has been such a weird winter that as there were no real frosts or a proper winter to kill off any bugs, his calves, within a few days of birth were diagnosed with some sort of food poisoning.  Cost = £8000 to treat them.  But all are saved.  Though I cannot see how he will ever get his money back.  And then he charges me £28 to sweep the chimney.  No wonder he looks mucky, probably cant afford soap.  I gave him more than £28.  And the cap off the chimney.  I should point out here that Alan is the only chimney sweep in the area and could/should charge us much more than £28.  He could charge what he wants and people would have to pay it.  But he doesnt.


So - what a day this has been.....
Tuesdays are my day out.  I go to Cafe Connect and am the link to all the volunteers beavering away in the schools.


This was followed by lunch at the Scottish Lighthouse Museum.  Its a hard life.


But I did have a high power discussion with the new manager there.  Trying to talk him into letting viewers of the exhibition in in September for nowt.  Our discussions are to continue via email.  Fingers crossed I can sell this to him.  Sell being the most inappropriate word, no hope for me is there!


Art class/group this morning.  Yesterday afternoon I finished off another painting for the Discover Art exhibition. 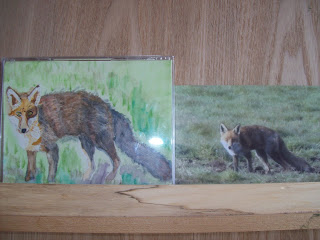 At the art class/group this morning I did some more on our topic of farm animals. 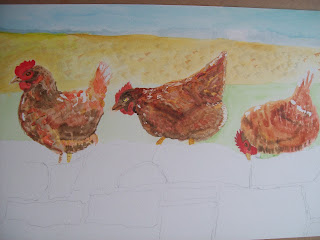 Getting there.  Hen in the middle has an extremely beady eye - waiting for the one in front to get a move on.


Also framed a painting done by one of the others in the art group.  After me saying that I judged a picture by "Would I want that on my wall?" and that I would.  He gave it to me! 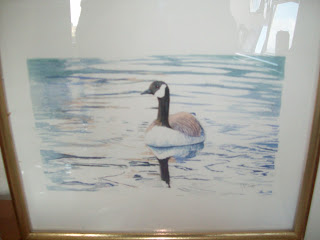 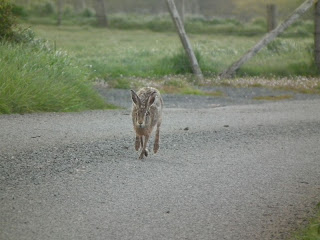 I hope you do sell your idea as it would make a big difference.
You've captured the fox perfectly in your painting and lovely to be given a gift of the other.

Message to Jill from Mum.