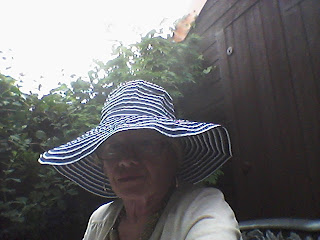 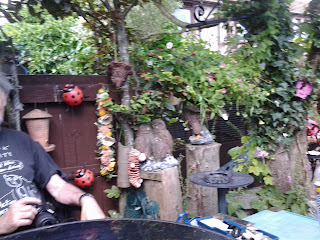 In the most amazing garden.  Aviaries full of all manner of highly coloured bird life, including a dove that sounded like a person practising the flute.  Plants crammed in everywhere, statues, ornaments, wood carvings, pathways, a pond, a rabbit, and a variety of people who claim to be artists.  Most of them sipping wine, eating sandwiches. 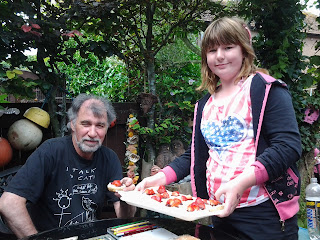 Scones with strawberries and cream.  (I am getting 'the look', as I said "No thank you.")  (This being an hour before me tea and the DP does not appreciate me saying I am full.....)

The rest of the group.  Quite a lot of discussion about dropped uteruses, or is it uterii?  Vicious dogs and anything but art, hence me being round the corner, having nothing to say, my uterus still being in place and I dont own a dog. 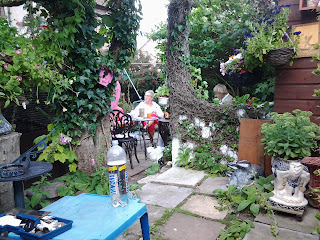 My mate Doug, framer of pictures extroadinaire, and bloody expensive, joined me.  He hasnt got a uterus and, like me, has cats. 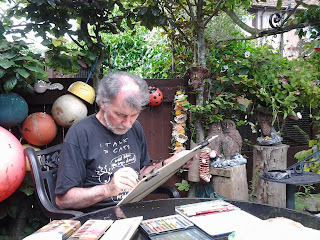 He instructed me to look up, look down, and I was beginning to think I was being drawn as the Mona Lisa, turned out he was drawing me hat.......

So I concentrated on a pen and ink drawing of the lovely foxgloves at my feet. 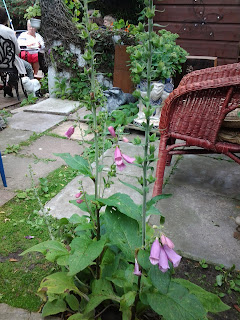 The rest of my week has been somewhat hectic, so was nice to chill out today.

Monday was spent at Aberdeen Royal Infirmary where both the DP and I were being tested for a genetic thing, which isnt a problem, well not for us, but once you are in their clutches the medical profession pursue the culprit and I think its him and he thinks its me.  If you are hanging on tenterhooks its called Von Willebrand Disease, so you can now google it.  I have far more interesting medical history than that one! 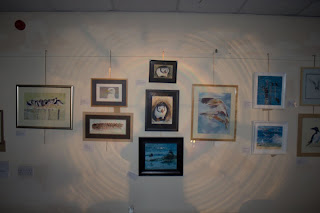 Yet another exhibition.....  But this time we were receiving instruction of how to hang properly.  Like using a tape measure......  Does look more impressive than any of my previous efforts.

I also spent Thursday at the Museum finishing the exhibition off.

Friday I was there volunteering.

Then oh whoopeedoo, that evening the NORTH EAST OPEN STUDIOS  organisers announced they were telling all where to collect their catalogues and signs, so this morning I was back at the Museum dishing the ****** things out.

Not heard of Von Willy thingy, Sorry you have to have tests. I have no uterus and do have a dog ! and,
I love mad conversations !
What a lovely day.

Is there any of your weeks that isn't hectic!
Love from Mum
xx
PS I have a uterus and 2 cats.